The most advanced and cutting-edge system to treat tumors

What is proton therapy?
What are protons?
Bragg Peak
Treatable tumors

What is proton therapy?

Proton therapy is a form of radiotherapy used to treat cancer, which is capable of striking only the tumor while preserving healthy tissue and allowing more intense doses of radiation to be delivered, thus increasing the chances of successful treatment. This is because while conventional radiotherapy uses X-rays or electrons, proton therapy involves the use of protons, i.e., heavier atomic particles with greater energy than electrons and therefore more precise and effective. With proton therapy, energy is released at a particular depth of the tissue, the so-called Bragg peak.

The proton therapy for cancer treatment was first proposed in the 1940s and subsequently tested in the 1950s. The first hospital dedicated to this therapy dates back to the 1990s; it was built in Loma Linda U.S. and today it still constitutes an essential reference point worldwide. Since then, more than 80 structures have been set up in various parts of the world and many others are under construction or planned. Over 130,000 patients have been treated worldwide.

Protons are heavy subatomic particles with a positive electrical charge. They release the maximum radiation dose at the end of their path. This physical characteristic is determined by the Bragg peak. Being characterized by a relatively large mass, the protons possess a scarce lateral dispersion when crossing through tissue; the beam therefore does not spread, but remains focused on the tumor mass, thus ensuring only low side effects to the surrounding tissue. All protons of a given energy have a given power of penetration and therefore very few protons penetrate beyond this distance, thus sparing posterior tissue of the tumor. 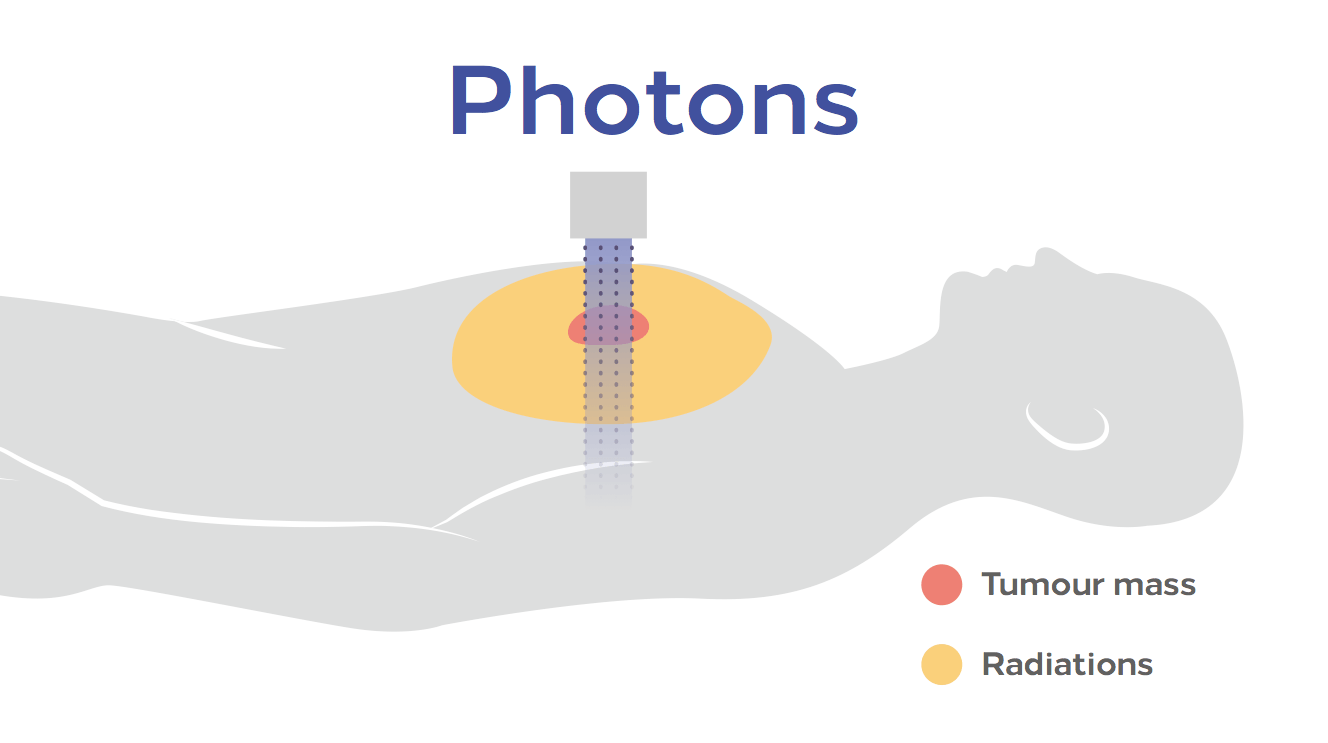 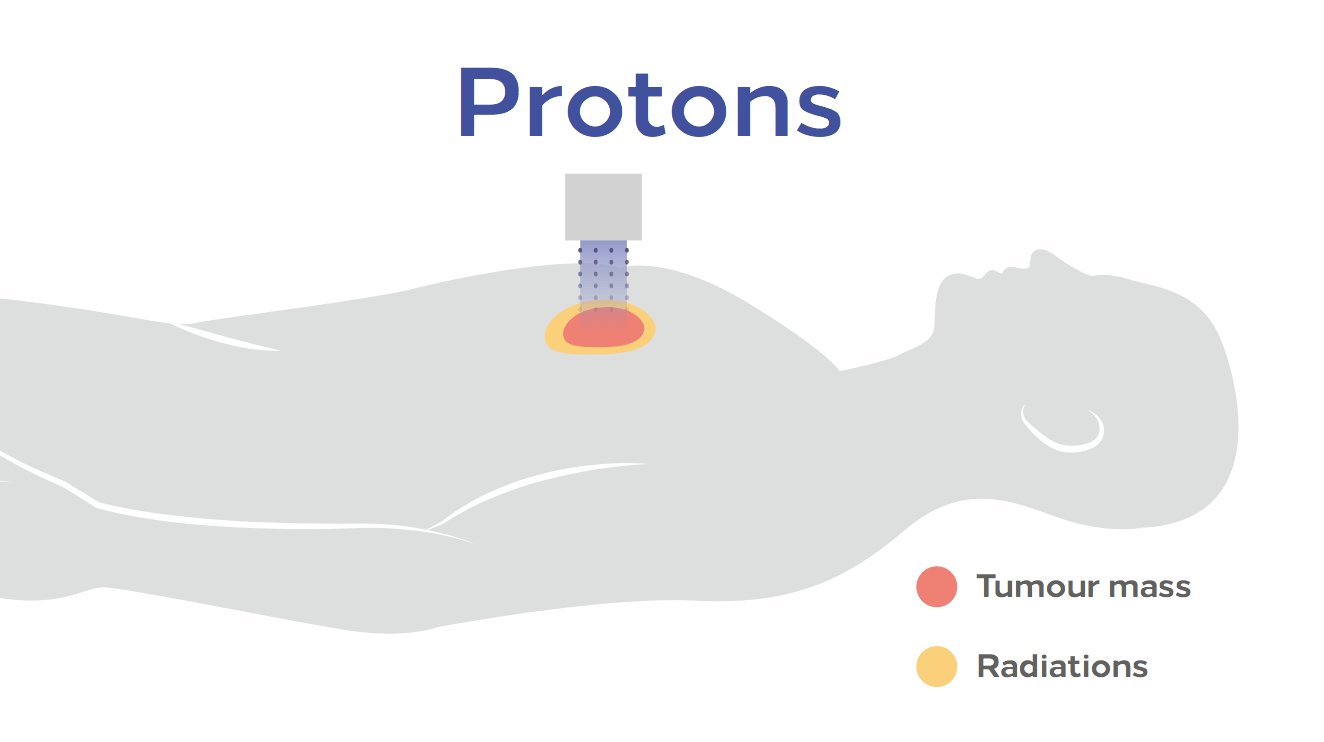 Proton therapy greatly reduces the risk of long-term side effects and is particularly suitable for patients who have a longer life expectancy after therapy.

The Bragg peak is the curve that is obtained by plotting the energy lost by a particle that penetrates into matter, depending on the depth it reaches as it progresses. The “peak” shape of the protons shows that these particles release most of their energy at the end of their path and this important feature is utilized in medicine to treat tumors without having to operate, thus using particles as “depth bombs.”

By changing the energy of the protons, health workers obtain control of the proton beam, which thus releases the tumoricidal dose only within the last millimeters of its travel, therefore striking exactly at the target. 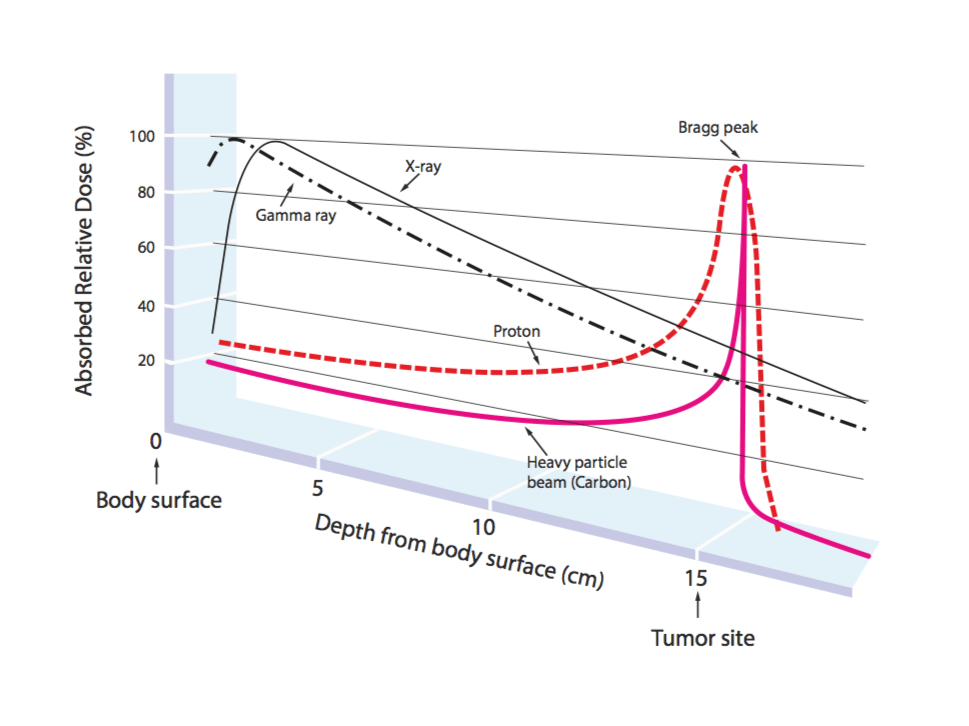 Proton therapy will completely replace conventional radiotherapy in a significant number of indications.

What types of cancer can be treated with proton therapy?

All tumors in which conventional radiotherapy is currently being used can be treated with proton therapy, all the more so in the case of tumors close to vital organs (head-neck). It is indicated in cases of radio-induced tumors (in patients already treated with conventional radiotherapy) and against all solid pediatric tumors, as it allows for the least possible impact on children.

5 reasons to choose ERHA, the Enhanced Radiotherapy with Hadrons

Respect for the environment: our system has almost negligible both instant and induced radiations, it avoids the need for large amounts of concrete shielding and it reduces problems of decommissioning and disposal of radioactive waste at the end of its life (20-30 years)

Small footprint: our structure extends mostly in length and requires a surface area of less than 100sqm. Therefore, it has very little impact compared to existing PT structures

Easy to set up in a shielded corridor, a warehouse or a parking lot, as it requires only a small flat surface

Ease of management by operators: the number of devices is reduced and control is achieved by a single software interface

we will be happy to assist you.

Contact us
This site uses cookies including third parties. Continue with the navigation and use our services implies acceptance of our mode of use of cookies. More information Ok
Go to Top